There are more than 50 million diabetics in the world. The disease is chronic and its cause is hereditary or an acquired deficiency in the production of insulin by the pancreas. The result is increased concentration of glucose or blood sugar in the body.

Moreover, diabetes is a complicated disease that can cause malfunctions of the heart and kidneys. It is also a major cause of blindness.

Nutritionists have recognized the importance of ampalaya (bitter melon) in the diet for diabetics. Ampalaya whether for its young leaves or fruits, it is rich in iron, calcium, vitamin B and carbohydrates. It can be served as tea with no sugar or part of your menu as vegetable or it can be powdered and processed into capsules. It has been found to be effective in lowering blood sugar of diabetics
.

Due to its bitter taste, food scientists and dietitian are experimenting with various food preparations with ampalaya as ingredient to make it palatable for people of all ages especially children while at the same time still retaining most of the vitamins and minerals.

The Philippines is a world leader in the breeding of ampalaya, The Institute of Plant Breeding in Los Baños, Laguna has developed two high yielding open pollinated varieties, Santa Rita and Makiling. These have been approved by the Philippine Seedboard for commercial production after extensive trials in various sites throughout the country.

The ampalaya Santa Rita variety is recommended for top quality markets and near ideal growing conditions. The fruits can be harvested 57 to 65 days after seeding during the dry season and 60 to 63 days during the wet season.

The ampalaya Makiling variety is recommended for less discriminatory markets and can be grown under harsher conditions. It is harvested 63 to 65 days after seeding, regardless of the season. Both varieties yield from 10 to 20 metric tons of fruits per hectare.

The other variety of ampalaya (bitter melon) is the hybrid variety that has been developed through continuous hybridization are the Jade Star A and Jade Star L. Its fruit sizes are highly uniformed, semi blunt and with shiny green fruit. Its potential yield is 42.20 metric tons per hectare which is by far superior than the open pollination variety in terms of yield. 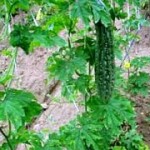