Mothers whose lives revolve around their children may be more likely to be stressed and suffer from depression, according to a study.

The researchers said the women who showed symptoms of depression were far more likely to endorse intensive parenting.

The researchers defined intensive mothering as women who believe they make better parents than men, that mothering should revolve around the child’s needs, who should also always be intellectually stimulated and that children should be seen as ‘sacred, delightful and fulfilling’ by their parents.

The researchers, from the University of Mary Washington, Virginia, said this obsession with being perfect is common to many middle-class parents and may be making them miserable.

The women, aged 18 to 49, were mostly middle-class and married or in long-term relationships.

The trend for mothers in particular to be extremely involved in their child’s every experience left their children fragile and unable to cope with life’s experiences of their own, according to psychologists

Women who believed mothers were the most important parents and were reluctant to let others help them care for their child were found to be less satisfied with their lives, while those who saw intensive parenting as a challenge requiring specialized knowledge and skills were more likely to be stressed and depressed.

American researchers questioned 181 women with children under five and found ‘intensive mothering’ has made its toll on their mental health.

Nearly one in four of the women displayed signs of depression, even after taking into account the support new mothers receive from their family, which is thought to have an important effect on mental health. 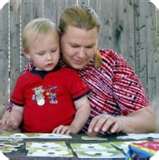