The Swiss victory was his first at Wimbledon since 2009, his last major win coming at the Australian Open in 2010, when he also beat Murray.

He is the second man over 30 to occupy top spot, goes away with the top prize of US$ 1,725,000 dollars (£1.15m) and will be heading to the Olympics, also being staged at the All England Club as the clear favorite.

For Murray, he is the first Briton to reach a men’s singles final at Wimbledon in 74 years.

The 25 year old Briton, aim to be the first British man to win Wimbledon since Fred Perry had clinched it in 1936.

Murray had started well, spurred on by a fervent home crowd desperate to see a first British winner in the men’s singles, breaking Federer in the very first game.

And though the 25-year-old then lost his own serve, he summoned another break to take his first set in a Grand Slam final.

As a tense second set neared its climax, Federer then executed two perfect drop shots to stun Murray and take it 7-5.

The third set was locked at 1-1 when a heavy burst of rain arrived, forcing the players off court as the recently installed roof was closed.

The change in atmosphere played into Federer’s hands as he reappeared rejuvenated. An epic sixth game of the set lasted for 20 minutes and ten deuces as Murray desperately tried to cling on to his serve.

But once Federer secured the break he quickly finished the set and then broke for 3-2 in the final set, sinking to the turf as a cross court forehand from Murray handed him his seventh title.

Murray, the first Briton to reach a Wimbledon final since Bunny Austin in 1938, broke down in tears at the closing ceremony, delivering his speech but faltering on numerous occasions.

“Everybody always talks about the pressure of playing at Wimbledon, but it’s not the people watching, they make it incredible,” said a tearful Murray in the wake of his defeat. 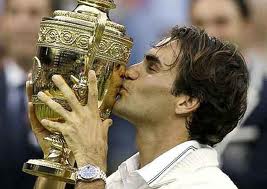