People power once again reigns supreme in Egypt as the Egyptian people roared in jubilation at Tahrir Square when they learned that President Hosni Mubarak has resigned.

The announcement was made by Egyptian vice president Omar Suleiman who appear also to have lost his position in the military takeover.

The military who successfully carried out the bloodless coup in behalf of the protesters pushed Mubarak to resign his post.

It has also announced the creation of a transitional government and the dissolving of parliament to pave way for a greater democracy and initiate the needed reforms.

Mubarak, a military commander, became president of Egypt in 1981 after then President Anwar Sadat was killed by Islamic radicals.

During Mubarak’s regime, he has been known to rig the elections just to stay in power. In his tenure as president, he resisted reforms amid graft and corruption in government.

His rule has not made Egypt economically better with its deteriorating infrastructure and the country’s poverty swelled to 40 percent.

The protests started by liberal, secular young people on the internet through social networks where it serves as an outlet for grievances which have built a greater awareness and bitterness among Egyptians over issues of corruption and police abuses.

The protest was formally called up last January 25, where it has swelled drawing hundreds of thousands of people joining the protests beyond organizer’s expectation.

It has been a tug of will between protesters and government forces, as police attacked the protesters with water cannons and gunfire.

It was also believed that a force of regime supporters and paid goons have assaulted Tahrir trying to break away the protesters, only to be beaten back two days later. About 300 people were killed during the turmoil.

In Mubarak’s last ditch to stay in power he delegated some of his responsibilities to Suleiman his vice president while keeping his position as president.

The move has triggered an explosion of protests in cities across the country that the military has decided to force Mubarak out completely.

Mubarak flew to his palace in Sharm el-Sheikh, 250 miles from the turmoil in Cairo. The country is now ruled by the Armed Forces Supreme Council, headed by Defense Minister Field Marshall Hussein Tantawi. 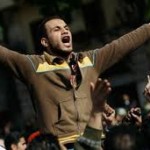 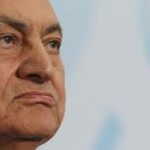 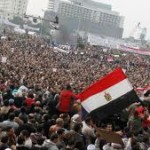