Rafael Nadal beats Roger Federer in their semi-final at the Sony Ericsson Open to pave way for the final against Novak Djokovic on Sunday, April 3.

The Spaniard beat his German rival 6-3 6-2 to improve his record to 15 victories in their 23 career meetings.

The world number 2 Djokovic is unbeaten in 2011 and is aiming to clinch his fourth title of the year.

The Djokovic, 23, has already won the Australian Open and titles in Dubai and Indian Wells. The Serb has shown a lethal instinct to win 25 successive matches since December. He is now 40 service games unbroken in the Miami event.

Djokovic is threatening to topple Nadal from the number one spot and beat the Spaniard in the Indian Wells final a fortnight ago.

Djokovic insisted that he didn’t feel like a favorite for the final despite his imperious recent form.

That sentiment was echoed by Nadal, who believes he will need more consistency against Djokovic than he had against Federer.

“Against a player like Novak, it’s impossible to win the match playing like this,” added the Spaniard. “So on Sunday I have to play very well all match if I want to have any chance. 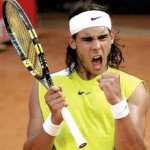 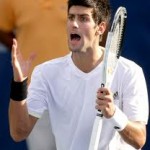