Cameron Diaz said that she knew Barrymore when they were in their teens. They first meet at Beverly Hills coffee shop where Barrymore was working.

Diaz further revealed that they’ve known each other so long. They met when she was 14 and Barrymore was 16. They met at a place that they both used to hang out in.

‘She was working at this coffee shop or this soda shop, and I used to go hang out there and we became friendly.

‘Once I started acting, she said, ‘Oh, I remember you!’ and we used to hang out and we became friends.’

The pair went on to star in Charlie’s Angels, which Diaz said is when they became ‘like sisters’. 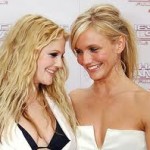