World no. 2 Rafael Nadal of Spain won the Monte Carlo Masters final against world no.1 Novak Djokovic of Serbia 6-3, 6-1.

Nadal’s victory was his 42nd in a row at the Mediterranean venue and marks his 47th career trophy and 20th in a Masters 1000 tournament, the first to achieve that honor.

After winning the first set, the Spaniard, who entered the tournament with a troublesome knee, raced to 4-0 in the second.

Grief stricken Djokovic, broke for the first time to make it 4-1 but Nadal hit straight back before sealing the title.

Djokovic, who also played and lost the 2009 final against Nadal, and was competing this week after learning of the death of his grandfather in Serbia. He had rallied from a set down in two of his four previous rounds.

Nadal took only 78 minutes to see off Djokovic, who suffered the loss of his grandfather on Thursday and never quite looked himself.

The Serbian managed just one break point throughout, while the world number two converted five of his eight.

Djokovic won his first service game to love but was broken in the third game of the set and struggled to get back into the match.

Monte Carlo is one of only two Masters 1000 tournament that Djokovic has not won, Cincinnati is the other.

“I’m sorry for my performance, Rafa played well and deserved to win today,” the Serbian said. 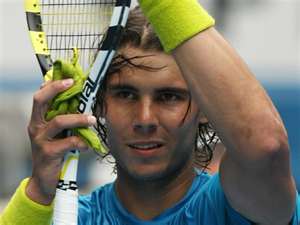