The traditional method of testing blood sugar levels involves painful pricks on the fingers to draw blood for testing. The inconvenient and painful process may somehow leave diabetics lax in their testing.

Unlike the old testing method, the new device which is being developed by American engineers at Arizona State University is to ease pain of blood sugar testing in diabetics, according to foreign media report.

The device is specifically designed for patients with type 1 diabetes and type 2 diabetes, according to a report in the “Journal of Diabetes Science and Technology,” it could could help people keep track of their blood sugar levels without the need to break the skin.

The new invention has attracted great interest from investors due to its promising potentials. However, it still in pilot testing and need considerable favorable results before it can be released to the market.

“This new technology might encourage patients to check their blood sugars more often, which could lead to better control of their diabetes by a simple touch to the eye.” said Jeffrey T. LaBelle, developer of the device. 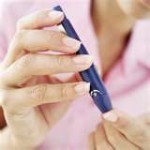