Nicolas Cage has been charged with domestic abuse, disturbing the peace and public drunkenness.

He and his wife Alice Kim were arguing outside a house in the French Quarter that the 47-year-old star said they were renting, a police statement says.

The actor has been arrested after an alleged drunken argument with his wife in New Orleans.

Ms Kim said it was not theirs and the Oscar winner grabbed her arm, and started hitting cars, it adds.

Cage was expected to make an initial court appearance on Saturday afternoon.

Cage, the nephew of film director Francis Ford Coppola, is best known for such films as “Raising Arizona,” “Gone in 60 Seconds” and “National Treasure.”

He has twice been nominated for an Academy Award, winning the Oscar for his portrayal of a down-and-out alcoholic in the 1995 film “Leaving Las Vegas.” 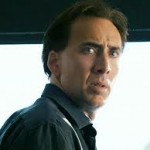