Ortiz knocked down Berto for the first time in the first round, and Berto responded by sending the off-balance challenger to the canvas in the second.

He rattled Berto in the third and punished the champion in the middle rounds.

Ortiz emerged with a convincing unanimous decision, improving to 29-2-2 with 22 wins inside the distance as he captured the WBC belt. It was Berto’s first defeat in 28 professional fights.

The sixth round was a thriller as Berto, standing his ground in the middle of the ring, knocked down Ortiz, only for Ortiz to drop the champion later in the same round.

Berto said, he wanted a rematch. 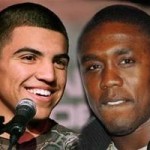