The impressive win of Nonito Donaire against Montiel has cemented all doubts of himself that he is indeed one of the top dog for the p4p accolade.

In his 2nd round demolition of Montiel, the reigning WBC and WBO Bantamweight Champion of the world, it is obvious that he is the apparent heir of Manny Pacquiao and shall be a boxing star of his own to be reckoned with, in the future.

In his clash with Montiel he has also shown a touch of class as a fighter in his offense as well as his defense. His power and speed were excellent.

As Donaire advances and improved his reputation as a fighter so with the prize-money that comes along with it that sooner he shall soon established his own sweepstakes outlet like Pacquiao, that every fighter wanted to fight him because he seems now to carry the lucrative prize on his head that everyone wants to take a share.

So far he has achieved his third divisional championship belt for having won the Flyweight and the Super-flyweight divisions respectively in his previous fights. As he goes up he will be fighting the top contenders of that division and it would be his fourth divisional title. If he shall be able to carry that speed as he goes up in weight that will remain to be seen.

What is important for now is that hopefully Bob Arum, his promoter shall be able to pit him up a top contender like Abner Mares Or Joseph Agbeko for the IBF or IBO bantamweight title for his next fight to settle once and for all, the undisputed champion tag before he goes up to the super bantamweight division to keep him busy and not to replicate of what had happened to him after that sensational knock-out he has done to Vic Darchinyan, that as if he has run out of worthy opponents after that just to keeping him going. 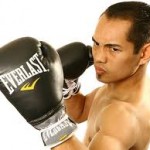 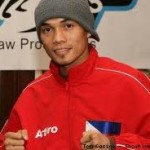