Two studies in recent issue of the journal Nature link heavy rains to increases in greenhouse gases more than ever before.

Extreme rainstorms and snowfalls have grown substantially stronger, two studies suggest with scientists for the first time finding the telltale fingerprints of man made global warming on downpours that often cause deadly flooding.

The study didn’t single out specific storms but examined worst of each year events all over the Northern Hemisphere.
While the study ended in 1999, the close of the decade when scientists say climate change kicked into higher gear, the events examined were similar to more recent disasters: deluges that triggered last year’s deadly floods in Pakistan and in Nashville, Tennessee, and this winter’s paralyzing blizzards in parts of the United States.

One group of researchers looked at the strongest rain and snow events of each year from 1951 to 1999 in the Northern Hemisphere and found that the more recent storms were 7 percent wetter.

That may not sound like much, but it adds up to be a substantial increase, said the report from a team of researchers from Canada and Scotland.

The British study focused on flooding in England and Wales in the fall of 2000. The disaster cost more than $1.7 billion in insured damages and was the wettest autumn for the region in more than 230 years of record keeping.

The change in severity was most apparent in North America, but that could be because that’s where the most rain gauges are, scientists said.

Jonathan Overpeck, a University of Arizona climate scientist who didn’t take part in either study praised them as sensible and “particularly relevant given the array of extreme weather that we’ve seen this winter and stretching back over the last few years.

Both studies should weaken the argument that climate change is a “victimless crime,” said Myles Allen of the University of Oxford. He co-authored the second study, which connected flooding and climate change in the United Kingdom.

Not all the extreme rain and snow events the scientists studied cause flooding. But since 1950, flooding has killed more than 2.3 million people, according to the World Health Organization’s disaster database. 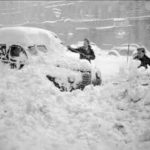 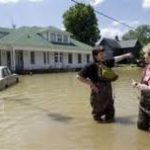 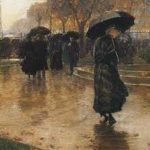