North Korea has strongly denied reports from South Korea that it is planning major policy shift that will lead to the reform and opening of the country.

Speculation of impending change was fueled earlier this month when the communist regime sacked prominent military chief Ri Yong-ho and replaced him with a little known general and promoted Kim Jong-un to the top military post of Marshal.

Seoul commentators claimed the changes may have been implemented to set the stage for possible efforts by Swiss educated young leader Kim to open up the country to political or economic reforms.

However, a spokesman for North Korea’s Committee for the Peaceful Reunification of Korea, which deals with cross-border affairs, dismissed the speculation in an interview with state run Korean Central News Agency (KCNA).

He said that Kim Jong-un would pursue the ‘military first’ policy brought in by his father and would build a ‘civilized and comfortable life for the people under socialism’.

The International Crisis Group (ICG) think tank said last week that there was nothing to suggest that Kim would take measures to improve the lot of his impoverished people in the isolated state.

The Brussels based ICG said that economic reform, however necessary to the country’s well being, would contradict the centrally planned system espoused by Kim’s father and grandfather.

Meanwhile, Pyongyang has recently warned Seoul and Washington, accusing them of sending a spy to the country with a mission to blow up statues of Kim Il-Sung, adding that the plot amounted to a ‘war action’.

It vowed to launch a ‘powerful physical counter-offensive’ against the United States, but did not elaborate further.

The threat comes after the North arrested Jon Yong-Chol who was presented at a press conference in Pyongyang earlier this month, where he claimed he had been promised handsome rewards from Seoul intelligence agents if he succeeded to blow up numerous monuments of Kim Il-Sung, the late founding leader of North Korea.

In April two giant statues of the two late rulers were unveiled in the capital Pyongyang, just hours after the North’s failed rocket launch seen by the US and its allies as an attempted ballistic missile test. 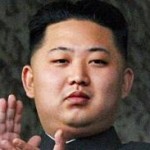