The Vienna-based International Atomic Energy Agency (IAEA), the UN’s nuclear watchdog announced it had received the invitation from North Korea on Monday.

The move was confirmed later by North Korea’s chief nuclear negotiator, Ri Yong-ho. Speaking in Beijing, he said: “In order to implement the agreement, we’ve sent a letter of invitation to the IAEA to send inspectors to our country.”

North Korea has invited UN inspectors to monitor a nuclear freeze deal with the United States, insisting the pact remains in force despite its shock announcement of a planned satellite launch.

The North last month agreed to suspend nuclear and long-range missile tests in return for food aid. It also agreed to allow UN inspectors in, the US said.

But North Korea’s pledge to co-operate with the international community was thrown into doubt last week, when Pyongyang announced plans to launch what it called a rocket-mounted satellite.

Any launch would be seen as violating UN Security Council resolutions, and the US has described the plans as ‘highly provocative’.

“The satellite launch is one thing and the DPRK (North Korea)-US agreement is another,” its chief nuclear negotiator Ri Yong-Ho said in Beijing.

The North will implement its deal with the United States in full, he told reporters, according to video aired by South Korea’s KBS television.

It agreed last month to suspend its uranium enrichment program, along with long-range missile launches and nuclear tests, in return for 240,000 tons of US food. It also promised to readmit IAEA inspectors.

The North insists a peaceful satellite launch is not a missile test.
But the United States, Japan, Russia and other nations have called for it to scrap the plan, and even close ally China has expressed concern.

Japan has said it may try to shoot down the North Korean rocket if it heads towards Japanese territory or waters.

In Washington US State Department spokeswoman Victoria Nuland said any IAEA access to the North would be beneficial.

“But it doesn’t change the fact that we would consider a satellite launch a violation, not only of their UN obligations but of the commitments that they made to us on Leap Day,” she said. 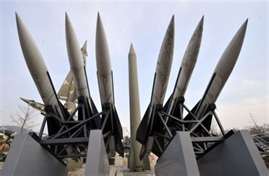