Charlie Sheen supposedly to make a come back if he was not fired with cause by his old network, as his character Charlie Harper of Two and Half Men is set to return as a ghost.

Though his character, Charlie Harper, was killed off on the ninth season premiere, his ghost will return on the tenth episode to haunt the CBS series.

The return of Charlie Harper will be played by Kathy Bates who will appear on Two and a Half Men as the ghost of Charlie Sheen’s character.

The 63-year-old Oscar winner will make her Men debut after Charlie’s brother,

Alan (Jon Cryer) lands himself in the hospital after suffering a minor heart attack.

The decision to cast Bates is seemingly random, though there is a somewhat slim connection.

The Harry’s Law star is best known for her Oscar winning role in Misery will make her comeback on the comedy’s upcoming April 30 episode.

She might need a little bit of comedy in her life, given that she has finally opened up dealing with her 2003 ovarian cancer in secret.

Bates revealed on Anderson Cooper’s talk show, ‘I was advised to keep my cancer quiet’.

Work appears to be keeping her sane, though it’s still confusing as to why she has been the chosen one to appear as Charlie Harper.

It has been hypothesized that Warner Bros. who produces both her legal drama-comedy Harry’s Law as well as Two and a Half Men could be taking another swipe at 48-year-old Sheen by hiring an actress best known for her performance in the film ‘Misery’.

They sent Sheen a cease and desist letter last week demanding that he stop using a photo from Two and a Half Men to promote his new comedy, Anger Management, which will premiere June 28 on FX.. 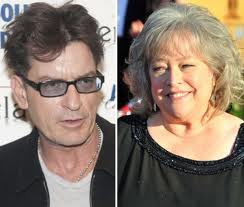