World no.1 Novak Djokovic prevailed on his winning streak and and advances into the semi-finals after beating Marcos Baghdatis 2-6, 6-2, 6-3 in the Swiss Indoors quarterfinals.

Djokovic loses the first set to Baghdatis but came back triumphantly in the next two sets thus improving his record against the Cypriot to 6-0.

“It’s nothing I didn’t expect, but I’m winning matches and that is what matters most,” Djokovic said.

Roger Federer, the defending champion of the tournament beat American Andy Roddick 6-3, 6-2. He defeated the American for the fourth time at Basel.

The Swiss top player improved his record against the 2003 U.S. Open champion, Roddick to 21-2.

If Djokovic and Federer get past with their respective opponents, the two is set to meet in the final for the third straight year. 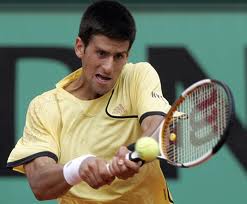