Andy Murray of Britain wins 6-3, 7-6 (8) over Mardy Fish of the United States in the semi-final at Cincinnati Masters in Mason, Ohio.

World no. 4, Murray survived a 2-hour, 18-minute match on a hot, humid afternoon that took a toll on both players.

Murray repeatedly bent over and grabbed the back of his legs during a close second set that included six service breaks. The Briton overcame a pair of break points late in the second set, then another in the tiebreaker.

He will meet in the finals the top seed Novak Djokovic of Serbia, who advanced when Tomas Berdych withdrew from their semifinal game due to shoulder injury. Murray will be trying for only his second tournament win this season.

Fish reached the semifinals with one of the best wins of his career, beating No. 2 Rafael Nadal for the first time in seven matches. He’ll be the top-ranked American heading into the U.S. Open.

Berdych on the other hand, who hasn’t reached a final since Wimbledon last year, broke Djokovic and led 5-4 in the first set. He double-faulted to even the match, a sign the shoulder was becoming a problem and Djokovic broke him again to win the set 7-5. That’s when Berdych withdrew. 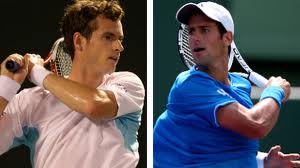