British no. 1 Andy Murray has improved a little bit in his recent performance against world no. 1 Novak Djokovic with former grand slam champion Ivan Lendl as coach at his corner.

However, Murray’s effort is not just enough to defeat the defending champion Djokovic which push Murray to the brink of his power but in turn was subdued instead in five sets to miss out a place in the Australian Open final.

Murray looked dead and buried at 2-0 down in the second set, and again at 5-2 down in the third before looking the more likely winner until Djokovic’s extraordinary survival instinct kicked in to bring him victory in a grueling four hours and 50 minutes.

Murray was outclassed by Djokovic in straights sets 12 months ago and for a time it seemed a repeat was on the cards.

The world number one, who beat Murray in the 2011 final, plays Rafael Nadal in Sunday’s showpiece at 0830 GMT.

“I’m extremely delighted to be in another final,” said Djokovic. Andy deserves credit for coming back into it. He was fighting and I was fighting.

“It was one of the best matches I’ve played.” 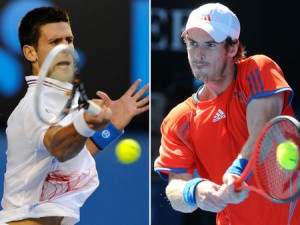