It was a perfect start by Djokovic at the French Open who has lost in 42 matches dating to last year’s Davis Cup final.

With his win against Poltro, this is his 40th straight victory this year.
Djokovic’s 40-0 start to 2011 is the second-best opening streak in the Open era, which started in 1968.

The two-time Grand Slam champion’s overall winning streak of 42 trails only the record of 46 set by Guillermo Vilas in 1977.

Djokovic entered the French Open after beating Nadal in two clay-court finals, making him a favorite for his first French Open title.

The Serb will be guaranteed to take over the No. 1 ranking if he makes the final.
In the next round (4th), Djokovic will face No. 13 Richard Gasquet of France. 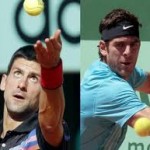