Britain was mad the way pop star Cheryl Cole was dropped from the US version of ‘The X Factor’ TV talent show because American audiences cannot understand her accent.

Reports so far note that Simon Cowell (who had hired Cole to be one of the four judges on the show) was not involved in the firing of Cole but it was the network’s decision.

Cole is from Newcastle in northeast England, which has one of the country’s strongest accents, and has admitted in the past that some Americans took time to adapt to her Geordie accent.

She will be replaced by Pussycat Dolls lead singer Nicole Scherzinger. Scherzinger previously served as a guest judge on the original U.K. version of the singing competition where she thoroughly impressed both producers and her fellow judges.

Cole, 27, had a string of platinum-selling hits and was a judge on the British version of ‘The X Factor’ before British TV mogul Simon Cowell offered her a chance to be a judge on the new US version, alongside singer Paula Abdul.

Other reports noted that Cole’s lack of chemistry with ‘X Factor’ judge Paula Abdul led in part to the decision, while it is claimed was also based on concerns over how Cole’s Northern English accent would be understood by U.S. viewers. 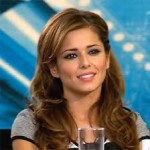