World no. 1 Novak Djokovic dominated and confirmed to be top of his game when he defeated Rafael Nadal in almost 6 hours of grueling tennis, the longest title match in grand slam history.

The match started before 8:00 pm on Sunday, but did not wind up until 1:40 am the following day, Monday or a total of 5 hours and 53 minutes of playing time.

The match outstripped the 1988 US Open final between Mats Wilander and Ivan Lendl, which lasted 4hr 54min, and also beat the Australian Open record of 5hr 14min set by Nadal and Fernando Verdasco.

Djokovic fought back from losing the first set and fourth set respectively but he was then taken to a gripping fifth set by resurgent Nadal before winning 5-7, 6-4, 6-2, 6-7 (5/7), 7-5 in retaining his Australian Open title.

The defending champion also fought down from break down in the final set as Nadal did everything he could to reverse the balance on their recent rivalry.

Djokovic fell to the floor after planting the winning forehand.

“Rafa is one of best players ever and one of the most respected guys on tour,” said Djokovic, who will hold all four Grand Slam trophies if he wins the French Open in June.

The Serb ripped off his shirt in celebration and marched to his players’ box flexing his muscles and then hugging his coach. 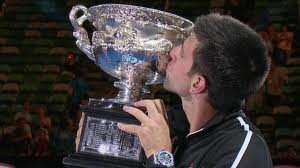