England’s Robert Rock won the Abu Dhabi HSBC Championship not only to get the better of Tiger Woods and Rory McIlroy.

Rock grabbed only his second victory in the European Tour events.

Ranked 117th in the world, Rock held off the better of Woods but also left Rory McIlroy paying the price for his two-shot penalty in the third round of the tournament.

Rock birdied three of his first six holes to set up a one-shot victory on 13 under.

McIlroy (69) birdied the last to finish second, while Woods struggled to find fairways or greens in his level-par 72 in the third slot with Graeme McDowell and Thomas Bjorn.

McDowell (68) aced the 12th and birdied the last two holes to tie for third with Woods and Thomas Bjorn (68).

“I was just happy to be playing with Tiger,” admitted Rock, who closed with a two-under-par 70. “That is a special honor in itself.”

McDowell, the 2010 US Open champion, picked up five shots in his final seven holes to catapult himself up to a share of third with Denmark’s Bjorn who shot up the leaderboard with a bogey-free 68. 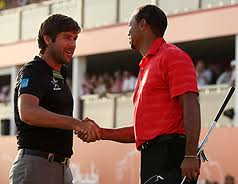