Djokovic began his rally by serving out the first game of the third set at love, then breaking Federer after five deuces.

“It was definitely the biggest win of this year, one of the biggest wins of the career under the circumstances,” Djokovic said. “Roger was in control, playing better. I switched gears and played much better over three sets.”

“It’s a risk. Last year, I was in a very similar situation. He was two match points up. I was hitting a forehand as hard as I can. You’re gambling. If it’s out, you lose. If it’s in, maybe you have a chance. I got lucky today.”

Federer said Djokovic is the best version of the kind of players he faced as a kid — who start taking huge chances when they feel they have nothing else to lose.

“Then to lose against someone like that, it’s very disappointing, because you feel like he was mentally out of it already,” Federer said.

But even with the loss, Federer showed he’s not done. To move within a point of the match after the way Djokovic played was a testament to what the 30-year-old still has left in the tank.

Djokovic will be facing for the finals the winner of Rafael Nadal – Andy Murray semi-finals duel. 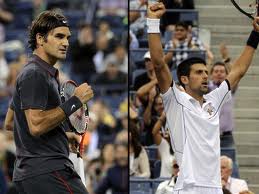