Novak Djokovic defeated Rafael Nadal in the Madrid Open with a 7-5, 6-4 at the Caja Magica to extend his record in 2011 to 32 consecutive victories.

It was the first clay-court defeat on Nadal in nearly two years while Djokovic maintained his own unbeaten record of his 2011 odyssey and that includes now the Madrid Open tennis tournament where he overcame Nadal in straight sets.

“Unbelievable,” a reaction made by Djokovic, whose winning streak totals 34 matches including last year’s Davis Cup final. “I stepped onto the court today believing I could win. I needed to be aggressive and it was a great match,” he added.

Madrid has never been Nadal’s favorite clay-court venue because of the faster pace caused by the high altitude, and he will hope that conditions favor him more at next week’s Rome Masters and, more importantly, Roland Garros later this month.

Djokovic has dictated the pace of the tournament for the most part of the final, his backhand impressive, and the rumors that he was struggling physically proved completely unfounded. 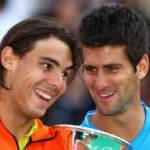