World no. 1 Novak Djokovic defeated Lleyton Hewitt in four sets with such gutsy display of stubbornness that was not ready to give up and certainly not enough to derail Novak Djokovic’s title defense at the Australian Open.

Hewitt looked down and out at two sets but he stormed back to take the third round and then to the fourth, hopeful to equalize the defending champion but to no avail.

Djokovic was cruising after winning the first two sets, but he then had to withstand a powerful Hewitt fightback, dropping his first set of the tournament before completing victory.

He won the first three games of the third, it seemed just a matter of time before victory was secured.

The Serb withstood a break point to lead 2-1 in the fourth and finally picked up a break himself to move 4-2 ahead but, after Hewitt had held his serve, Djokovic completed a hard-fought victory.

The top seed will be playing against David Ferrer in the quarter-finals. 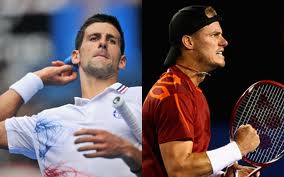