Hearing impairment was first linked in major medical journals to dementia and cognitive dysfunction more than twenty years ago.

Hearing loss, a disability currently untreated in about 85 percent of those affected. They can still hear sounds and think the real problem is that people aren’t speaking clearly.

They often ask others to speak up, repeat what was said or speak more slowly. As hearing worsens, they are likely to become increasingly frustrated and socially isolated.

Social isolation, in turn, has been linked to depression and an increased risk of death from conditions like heart disease.

Rose Marie Jewett, 83, of Janesville, Wisconsin, who had experienced progressively worsening hearing loss for decades, had all but given up hope of hearing others speak or ever again enjoying music.

She said she could understand how hearing loss could lead to dementia, because she was ‘forgetful’ when she did not hear what she should have heard.

It’s not that she forgot things but rather, she had never heard them to begin with, and the strain of constantly trying to piece things together was taking its toll.

“When you can’t hear anybody, you don’t pay attention,” Ms. Jewett said. “You shut yourself off from the world, you don’t think very well, your memory gets bad and you get kind of dull.”

Dr. Frank R. Lin, an otolaryngologist at Johns Hopkins Medicine, and his colleagues there and at the National Institute on Aging showed a direct relationship between the participants’ degree of hearing loss and their risk of later developing dementia or Alzheimer’s disease.

The relationship between hearing loss and dementia persisted even when other factors linked to cognitive disease, like hypertension, diabetes and smoking, were taken into account.

“People are most likely to notice communication problems when their hearing loss exceeds 25 decibels,” Dr. Lin said in an interview. Hearing loss at this level affects the clarity of words.”

“The brain dedicates a lot of resources to hearing,” Dr. Lin said. “When the clarity of words is garbled, the brain gets a garbled message. It has to reallocate resources to hear at the expense of other brain functions.”

Thus, the overworked brain may lose “cognitive reserve,” the ability of healthy parts of the brain to take over functions lost by other parts. 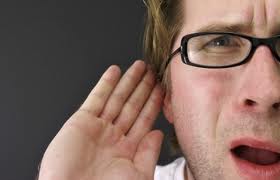