World no. 1 Novak Djokovic has his eye to win the French Open title this year. Among the major titles in tennis to have eluded the 24 year old champion are the French Open and the Olympic gold medal.

When Djokovic was asked to choose which of the major titles he preferred, his reply was: “Why not both?” the confident Serb shot back after collecting his Laureus sportsman of the year award in London Monday.

When the Serb was asked for the most of his public appearances, the Australian grand slam winner this year is tempered with a smile, suggesting he is not getting too carried away with his huge success over the past one year and two months.

When Djokovic addressed the question seriously, his response was straightforward.
“I will try to set up my form for Roland Garros first of all, where I want to get the title and go all the way through, and then I’ll start thinking about Wimbledon and the Olympics.”

The Serb’s dominance in 2011 was briefly interrupted by Swiss Federer at Roland Garros, who snapped his 41-match winning streak in the semi-final.

Djokovic has never made it past the last four in the year’s second grand slam and would likely have to beat Nadal to claim the title in Paris, where the Spaniard has reigned supreme in six of the last seven tournaments.

In December 2010, Djokovic spearheaded Serbia to their first Davis Cup triumph then went on to win three of the four major titles in 2011, before outlasting Rafa Nadal in the longest grand slam final played to defend his Australian Open crown last month.

Should he come out on top on the red dust in June, Djokovic would join an elite crew of players to have won all four grand slams, comprising Federer, Nadal, Americans Andre Agassi and Don Budge, Briton Fred Perry and Australians Rod Laver and Roy Emerson.

Djokovic has beaten Nadal in seven consecutive finals, including the title match at Melbourne Park, and is also set on taking the Spaniard’s gold in London, despite some worries the Wimbledon surface may not be in great shape after the year’s third grand slam in June and July.

“It’s going to be interesting to see how the grass will recover, but I’m informed already that they have everything prepared,” said Djokovic, who chewed on a piece of the turf after winning last year’s final against Nadal.

If Djokovic’s demeanor and play carry on in this vein, he will be taking a bite out of a gold medal come August.

Out of his contemporaries, though, Federer’s record haul of 16 grand slam titles remains the benchmark, while Nadal holds the coveted Olympic gold medal from Beijing four years ago. 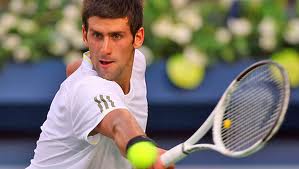