Demi Moore is undergoing treatment for substance abuse and anorexia’ at Cirque Lodge in Utah, which has previously treated stars including Lindsay Lohan, Mary Kate Olsen and Eva Mendes.

Medical doctors at the center don’t want the 49 year old actress focusing on her size while she recovers.

A source told Radar Online, ‘It’s common treatment practice at Cirque to not allow patients that are being treated for an eating disorder to see how much they weigh when they step on the scale.

The patients’ weights are being monitored daily by doctors and the same want to make sure that their patients are not losing weight while in their custody.

Doctors at Cirque Lodge don’t want patients to fixate on their weight. The counselors are working on giving Demi a safe and controlled environment, she is getting the best care possible. She is not being forced fed for not wanting to eat.

‘She is also dealing with an addiction to prescription medication, and she has a comprehensive team taking care of her.’

The actress is expected to spend at least two months in the treatment center and will be prevented from contacting the outside world including her daughters Scout, 20, Tallulah, 16, and 23-year-old Rumer, former husband Bruce Willis or estranged spouse Ashton Kutcher, for some time.

The source added: ‘Demi won’t be allowed to call anyone during the first week, nor can she receive any phone calls. As time goes by, and if Demi is doing well, her doctors will allow her to have limited access to her cell phone for a small amount of time.’ 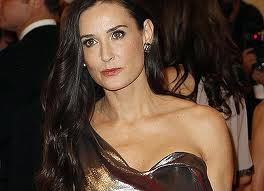