Djokovic breezed through the opening stages of the tournament, having dropped only one set which came in the previous round against home favorite Lleyton Hewitt.

It was not all plain sailing for the Serbian against world number five Ferrer in a match lasting almost three hours.

Djokovic found the mental and physical strength to hit back with five straight winners to open up a commanding lead.

“I was lucky to get out of the second set. But you just have to keep hanging in there, especially with players like Ferrer who have great character.

He will face world no. 4 Andy Murray of Britain, who beat Japan’s Kei Nishikori, earlier.
“But I’m going to need more than that, Andy is playing great. He has showed he is in great shape and he has Ivan Lendl (Murray’s coach) on his side. 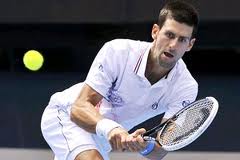