Top seed Novak Djokovic routed world ranked no. 74, Argentinian Carlos Berlocq 6-0, 6-0, 6-2 in the second round of the US Open.

“I felt fantastic on the court,” said Djokovic, who improved to 59-2 on the year. “And there is not much I can say when everything seems fun and enjoyable when you’re playing such good tennis.”

Berlocq, who favors clay, persisted in playing about three meters behind the baseline, allowing his opponent to dictate play on almost every rally as the underdog scampered from side to side, usually in vain.

Berlocq turned to Djokovic in exasperation after losing an exchange that gave the Serb his 14th game in a row, but he received the loudest cheer of the night in the next game as he finally got on the board with a thumping backhand winner.

Through it all, Berlocq tried to enjoy it. But when the bagels are adding up, it does bring another element to the match. He lost the first 14 games, but did enough to avoid becoming the first person to get beat love, love and love at the U.S. Open since 1987, when Ivan Lendl did it to Barry Moir. 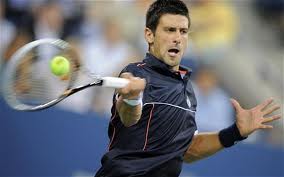