Roger Federer routs Adrian Mannarino 6-2, 6-3, 6-2 in just under 90 minutes to scorch into the third round at Wimbledon.

Federer will now play Argentinian veteran David Nalbandian for a place in the last 16 on Saturday.

Novak Djokovic celebrates his win over Kevin Andersen, after beating him 6-3, 6-4, 6-2.
Djokovic who has lost only one match this year, in the last French Open semi-final to
Federer maintained his red-hot form with a ruthless straight sets win over the South African, Anderson.

Djokovic will face Cypriot number 32 seed Marcos Baghdatis in the third round.

Federer was joined in the third round by second seed Novak Djokovic and fifth seed Robin Soderling from Sweden, who overcame Lleyton Hewitt in a thrilling five-setter 6-7 (5/7), 3-6, 7-5, 6-4, 6-4.

Soderling now faces either Australian youngster Bernard Tomic or Russia’s Igor Andreev in the next round. 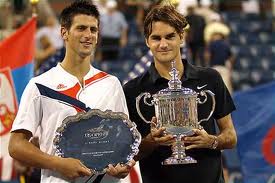