Sayote, a vine plant that bears a pear like shaped fruit is a common vegetable in the Philippines that thrives in cooler climate.

It is an edible plant that belongs to the cucurbits family or vine crops that are grown mostly of their fruits like melons, patola, cucumber, kondol, upo and squash.

Sechium edule is the scientific name of sayote and is grown commonly on the ground or on trellises, it has large leaves that form a canopy over the fruit.

Most people are familiar only with the fruit, but the root, stem, seeds and leaves are all edible.

The fruit does not need to be peeled and can be eaten raw in salads. Cooked or raw, it has a mild flavor by itself and is commonly served especially in Australia with seasonings of salt, butter and pepper or in a dish with other vegetables.

In the Philippines, sayote is peeled, cut them into thick slices and then cook with meat or shrimps.

Sayote can also be boiled, stuffed, mashed, baked, fried or pickled. The young leaves and tender shoots can be made into salads.

The tuberous part of the root and other surplus can be fed to cattle, goats, swine and other backyard animals.

Unknown to many, sayote has medicinal uses where the leaves and fruit have diuretic, cardiovascular and anti-inflammatory properties.

A tea made from the leaves has been used in the treatment of arteriosclerosis, hypertension and to dissolve kidney stones.

Researchers from Ecosystems Research and Development Bureau (ERDB) in Los Baños, Laguna, found sayote to be a good soil restorer. They found that sayote has the ability to grow profusely in areas where there are gullies and its canopy completely rehabilitated the gullied areas. 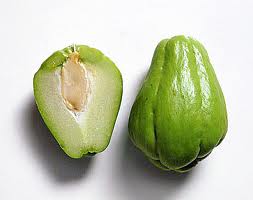 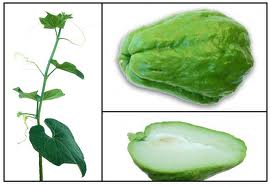