World number one Novak Djokovic avoided an upset against Radek Stepanek to book his place in the fourth round at Wimbledon.

Djokovic rallied after failing to convert his first five break-point chances before he lost serve at love to drop the opening set.

The Wimbledon defending champion has dominated the remaining final three sets 4-6, 6-2, 6-2, 6-2 of the round.

Stepanek repeatedly played serve and volley and had Djokovic on his heels in the early going. Djokovic hit an improbable winner that skipped off the top of the net post and still lost the first set.

On the second set the match reverse its way, and the 28th-seeded Stepanek couldn’t compete with Djokovic’s flawless play. The Serb committed just 13 unforced errors in 221 points.

The match was entertaining even as it became a lopsided dominance of Djokovic.

Six-time champion Roger Federer overcame a major scare to beat Julien Benneteau in five sets and advance to the fourth round of Wimbledon.

Having clawed his way back to his senses, Federer took advantage of an injury to his French opponent to sweep through the final set in 26 minutes.

The third seed Federer plays Belgian Xavier Malisse on Monday for a place in the quarter-finals. 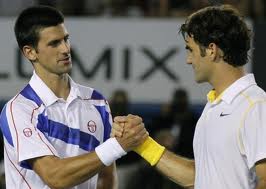