In a surprise move, Katie Holmes filed for a separation from Tom Cruise in New York citing ‘irreconciliable differences’.

The ‘Mission Impossible’ star was ‘deeply saddened’ by wife’s decision to end marriage.

Although the couple have faced breakup rumors ever since their whirlwind romance led to an engagement, then marriage, the timing and circumstances of the break up still came as a surprise to many people.

Cruise confirmed that it was Holmes who initiated the divorce from him and the brief statement from his representative spoke of the star needing privacy to ‘work this out.’

Sources insist, however, that she did tell her husband of five-and-a-half years that she was divorcing him and she didn’t give him a chance to control the spread of the news, as he did with Nicole Kidman.

Part of Holmes’ demand in the divorce was for sole custody of their daughter, Suri, aged 6.

The former Dawson’s Creek actress is also asking for a division of property in the divorce documents, although there is a significant pre-nuptial agreement that is based on California law. The couple are worth around US$ 275 million, much of that owing to Tom’s box office success.

Although Tom and Katie were married in California, Katie went all the way to New York to file the divorce documents because she knows she has a much better chance of getting sole legal custody there for their daughter.

Besides, New York family law judges typically don’t like giving two parents who don’t get along because they believe the kids will suffer from endless conflicts and also, Katie doesn’t want Tom to drag their daughter into the Church of Scientology.

Holmes failed to turn up to at any of the worldwide premieres of her husband’s latest film Rock of Ages, despite Cruise’s upbeat tone in interviews promoting Rock of Ages, gushing Holmes with praises and supposedly their ongoing good relationship.

The final arguments seem to have been over when he told her that he was planning to be on the set of his latest film ‘Oblivion’, in Iceland to spend his 50th birthday and that seems to have been the last straw. 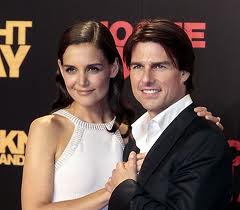