It was the first time Nadal had lost before the third round of a Grand Slam since he was beaten by Gilles Mueller in the second round at Wimbledon in 2005.

Nadal won the Wimbledon championship in 2008 and 2010 and this year should have been supposedly his third Wimbledon title.

Rosol, who is making his main draw debut at Wimbledon after losing in the first round of qualifying for the last five years, will play Philipp Kohlschreiber next after the German beat Malek Jaziri.

The top seed find the match more difficult than the scoreline suggests. It was a great match and was in trouble in the second set, but Djokovic fought off six break points in the sixth game of the second set.

Djokovic was far from his best when he trailed 0-40 to 20-year-old Harrison at 2-3 in the second set, but survived the break points before recovering and then regaining control.

Djokovic failed to convert his first match point but sealed victory with a service winner.

The Serb next tackles either Czech 28th seed Radek Stepanek or Benjamin Becker of Germany.

The third-seed Roger Federer took just one hour and 17 minutes to beat Italian Fabio Fognini 6-1, 6-3, 6-2 in the second round.

Fognini received a quick lesson in bowing from Federer before walking onto Center Court while Prince Charles along with his wife Camilla were watching from the royal box.

The Swiss who is chasing Pete Sampras’s record of seven Wimbledon titles, fired 13 aces and 35 winners and has lost just nine games in his first two rounds.

Federer, who has lost in the quarter-finals for two years running, next faces France’s Julien Benneteau for a place in the last 16. 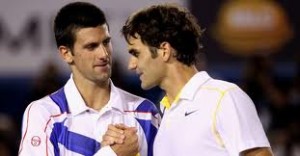