World top ranked Novak Djokovic won his ninth title of the season on Sunday with a 6-2 3-6 6-4 win over American Mardy Fish in the Rogers Cup tennis finals tournament in Montreal.

Djokovic points to a new diet as a big part of his success but according to most observers the real difference in his game appears to be his attitude and mental toughness. The 24-year-old seems more willing to gut out close contests and do what it takes to win.

Fish has lost all seven career meetings with Djokovic, but gave the top seed a battle with his awkward mix of baseline and attacking play. 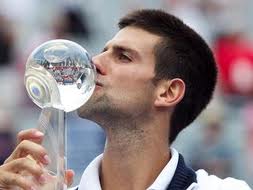