Ernest Borgnine, 95, whose movie and tv career spanned more than 60 years, has died of renal failure in a Los Angeles hospital with his family by his side, his spokesman has said.

Borgnine from Italian descent, was born Ermes Effron Borgnino on 24 January 1917 in Hamden, Connecticut. His parents later changed the family name to Borgnine.

Borgnine gained his first major film role in From Here to Eternity in 1953, playing a sadistic sergeant who beats up film character, Private Angelo Maggio, played by Frank Sinatra.

In 1955, he landed an Oscar-winning lead role as a romantic New York butcher in the low-budget film Marty.

Borgnine was presented his Oscar by Grace Kelly in 1955.

Although he purportedly dislike television, his series, McHale’s Navy, was a major success in the United States. Another well-remembered TV role came in the 1980s, in the action series Airwolf.

Borgnine’s work in later life included playing the voice of Mermaid Man on children’s TV series SpongeBob SquarePants, as well as that of Carface on the animated film All Dogs Go to Heaven 2.

Even already at his nineties, Borgnine continued acting until recently with a role in the hospital drama ER in 2009.

His personal life was a troubled one, which included four failed marriages. However, his fifth marriage, to Norwegian-born businesswoman Tova Traesnaes in 1972, lasted. 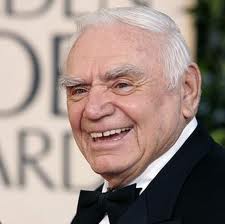