Ozzy Osbourne, the frontman of the heavy metal group Black Sabbath, has announced that they are reuniting for a new album and will be doing a reunion tour next year.

The incarnation of the band, fronted by Ozzy Osbourne, will record new material with legendary producer Rick Rubin and play the 10th Download festival next summer.

Rubin, whose previous production credits include hip-hop luminaries Jay-Z and Public Enemy as well as rock bands such as the Red Hot Chili Peppers, said: “When I’ve sat with them and they’ve played it sounds remarkably like Black Sabbath.”

The quartet, who first got together under the Black Sabbath name in 1969, all wore their familiar black outfits as they made the announcement.

The band have sold in excess of 70 million records worldwide and are responsible for pioneering the heavy metal genre with hits such as ‘Paranoid’, ‘War Pigs’ and ‘Iron Man’.

Heavy metal pioneers Black Sabbath are to record their first new album with the original line-up for 33 years and they added that they were working on new material for an album with a release date slated for next autumn.

The band revealed they have written seven or eight new songs for the new record. The quartet released ‘Never Say Die,’ their last studio album of all original material in 1978.

The original foursome reunited for the 1998 release Reunion and played again together sporadically for shows in the early 2000s.

Black Sabbath was inducted to the U.S. Rock and Roll Hall of Fame in 2006. 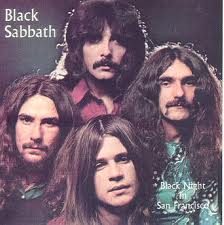