Peter Hanson of Sweden fired a 65 nine under to take a one shot lead over his closest rival at this time Phil Mickelson who fired a 66 eight under, in the third round of the Masters at Augusta.

Hanson will go toe-to-toe with Mickelson in the final group at The Masters on Sunday.

The Swede Hanson does not have a single top six finish in any major to his name – his best was seventh in last year’s US Open 11 shots behind McIlroy.

Halfway leaders Fred Couples and Jason Dufner fell away on Saturday with rounds of 75 to end two under in a goup which includes England’s Ian Poulter, who carded 70. Scot Paul Lawrie has sole possession of 10th place on three under after a 72.

Rory McIlroy slumped to a 77 to end a disappointing round and sits on one over with Graeme McDowell one shot back on two over par and world number one Luke Donald took 75 to end seven over.

Tiger Woods will begin the final round 12 shots back after treading water at three over with a level-par 72.

First round leader, Lee Westwood is going to have to produce something special as well if his 56th attempt to win a major is going to be his first victory.

The Englishman (72) is in a group on four under alongside America’s Hunter Mahan (68), Ireland’s Padraig Harrington (68) and Sweden’s Henrik Stenson (70).

Eight players held at least a share of the lead at some stage on an absorbing day in the Augusta sun.

Despite favorable scoring conditions, no-one was able to escape from the pack until Mickelson sank a 25ft eagle putt on the 13th to join Kuchar and Oosthuizen in the lead at six under. 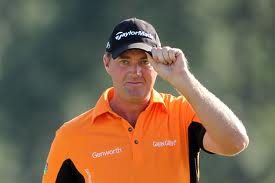