Phil Mickelson is the Masters’ defending champion though, this is his first time to be ahead of Woods in the rankings since 1997.

He is the hot favorite to defend his title this year. The three time champion recently won the Houston Open and collectively has 13 top 10 finishes in his 18 appearances at Augusta.

The last European to win at Augusta was Jose Maria Olazabal in 1999 and England’s Luke Donald has an impressive record at Augusta with a best of third place in 2005.

Phil Mickelson, being treated with arthritis, would never discount any single player in the field to play his best to win this tournament.

“I’ve always felt that this tournament has a lot of players that are playing well heading in,” said world number three Mickelson.

Former world number one Tiger Woods, now ranked seventh, is seeking a fifth Green Jacket but has been struggling for form after last year’s divorce and program of swing changes under new coach Sean Foley.

Tiger Woods Woods is confident of winning his fifth Masters title. However, Woods now finds himself at something of a crossroads in his pursuit of Jack Nicklaus’s record of 18 major titles but remains adamant that it is still his goal.

“I absolutely want to do it,” he said. “That’s the benchmark and gold standard in this sport.”

Of his swing changes, Woods said: “It’s taken a long time to develop the patterns and know what the fixes are. I’m finally starting to shape the ball both ways and being able to fix it if I don’t. It’s just a totally different philosophy from what I was doing before.” 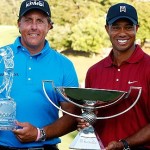 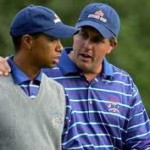