This is to reduce the potential risk of a hydrogen explosion, while it succeeded in stopping highly radioactive water leaking into the Pacific Ocean from the plant the previous day.

Nitrogen, an inert gas, was injected into the No. 1 reactor’s containment vessel, a process that could take several days.

Hidehiko Nishiyama, a spokesman for the government’s Nuclear and Industrial Safety Agency, denied there is an ‘immediate danger’ of explosion and described the injection as ‘a preventive measure’.

TEPCO has also been engaged in efforts to stop highly radioactive water from leaking into the sea and cleaning up contaminated water within the plant.

In announcing TEPCO’s decision to inject nitrogen into the reactor’s containment vessel, an operation approved by the government, the nuclear agency said that radioactive leaks are ‘unlikely to significantly rise’ even if the pressure inside the vessel increases as a result of the injection.

The utility has been pouring massive amounts of water into the reactors and their spent nuclear fuel pools as a stopgap measure to cool them down.

But the measure is causing ‘side effects’, such as the detection of contaminated water in various parts of the nuclear complex and some leakage into the sea.

The group also called for the dumping of contaminated water and the leakage of highly polluted water from the plant to be halted so as to prevent Japan’s fishing industry from ‘perishing’.

To prevent the already seriously contaminated seawater close to the plant from spreading further, TEPCO is planning to install ‘silt fence’ barriers in the sea, such as near the No. 2 reactor water intake. 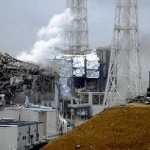