American golfer Phil Mickelson tied with compatriot Keegan Bradley with both have seven under par 206 after the third round.

Mickelson, 41, is aiming for a 41st PGA Tour title but was struggling with some wayward driving and was forced to scramble to stay in touch with Bradley.

The four-time major winner was pleased with his par save at the driveable 315-yard 10th, where his tee shot ended up well left of the green behind a Bottle Brush tree.

He then clipped a branch with a lob wedge and failed to reach the green in two. But he struck a deft chip from a swale to three feet and holed the putt.

“That was a good par because it’s still a tough up-and-down even down in that valley,” said Mickelson.

Bradley, 25, who has been helped by Mickelson since he first met the three-time Masters champion at the 2011 Houston Open, sank a nine-footer on the 18th green to seal his 66.

“I love Phil. Everything he’s done for me is great, and if I didn’t win tomorrow, I would hope he would,” he said.

The US trio of Jonathan Byrd, Pat Perez and Bryce Molder ended six under, while England’s Justin Rose was two under and world number one Luke Donald level. 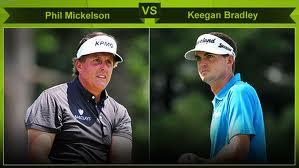