Months of research by experts at New Mexico’s State University’s Chile Pepper Institute have identified the Trinidad Moruga Scorpion as the hottest pepper on the planet.

It scored the highest among a handful of chili breeds reputed to be among the hottest in the world.

Researchers were pushed by hot sauce makers, seed producers and others in the spicy foods industry to establish the average heat levels for super-hot varieties in an effort to quash unscientific claims of which peppers are actually the hottest.

Randomly selected mature fruits from several plants within each variety were harvested, dried and ground to powder. The compounds that produce heat sensation, the capsaicinoids were then extracted and examined.

Chile peppers of the same variety can vary in heat depending on environmental conditions. More stress on a plant, hotter temperatures or less water, for example, will result in hotter fruit.

The Trinidad Moruga Scorpion’s hotness is already making waves in the industry and among those who love it.

Jim Duffy, a grower in San Diego or the researchers would dare to pop a whole Trinidad Moruga Scorpion in their mouths, but there are plenty of videos on social networking sites where heat-loving daredevils have tried.

The blood flow increases and the endorphins start flowing. Their faces turn red, the sweat starts rolling, their eyes and noses water and there’s a fiery sensation that spreads across their tongues and down their throats.

More bang for the buck is how Bosland describes it. He said a family could buy two of the super-hot peppers to flavor their meals for an entire week.

The beauty of the peppers is they’re not only the hottest in the world, but they’re also some of the most flavorful peppers, Duffy said. 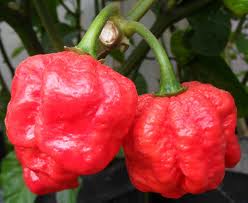