In a twist of fate, Josephine Castro, assistant manager for reclamation of the Philippine Reclamation Authority, pointed out that the lagoons themselves where they became the bird’s sanctuary were on land that was reclaimed from the bay in the 1970s but never developed as originally planned.

Squatters initially colonized the land when it was left vacant, according to Castro. But when it began to sink in the 1980s, the squatters were relocated and the government planted mangroves on the site to stop the water from reclaiming the land again.

The Philippine government is planning to reclaim another 635 hectares in front of the sanctuary to create a new business center for southern Manila.

Detractors of the Php 14 billion pesos (US$ 324 million dollars) project fear that the sanctuary would be left largely cut off from the bay although most of the lagoons would initially remain intact.

Salt marshes, tidal areas and three mangrove-clad islands that make up the 175-hectare (432-acre) zone are a home or a resting spot for dozens of bird species, including the globally-threatened Philippine duck and Chinese egret.

In a sprawling mega-city of more than 12 million people that has seen decades of chaotic development, the area known as Coastal Lagoons is vital because there are so few other bird habitats left, environmentalists say.

“More than 95 percent of natural wetland habitats in the bay have been converted to fishponds.”

Ornithologists had counted up to 28,000 birds in Manila Bay in a single day in the 1970s, before the fish pond industry exploded and land reclamation began, according to Michael Lu, head of the Wild Bird Club of the Philippines.

Philippine Reclamation Authority insists the development, which it will carry out with local authorities and a private investor, would maintain the integrity of the habitat.

Castro also said the authority had revised the original project design so that only eco-tourism activities, and no commercial development, would take place in the Coastal Lagoons. 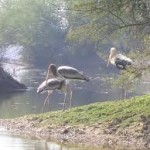