Pippa Middleton became known around the world for her buttocks during her role as maid of honor for her sister Catherine’s wedding to Prince William on April 29 at Westminster Abbey.

The furor surrounding Pippa Middleton’s behind has led to an increase in bookings for bottom-lifting treatments in Britain.

Since the royal wedding, cosmetic surgeons have reported a 60 per cent increase for work on British women backsides.

One cosmetic clinic has even tagged the cosmetic procedure as, The Pip Package Perfect Posterior, which can cost up £8000 British pounds (US$16,612).

The tabloids in the past two weeks have filled their pages with dieting and nutritional tips to help women to have a bottom like the slim 27-year-old instant celebrity.

But Khan had sobering news for those ladies trying to replicate Pippa’s figure.
“A bottom can only ever be as beautiful if it is relative to the rest of a woman’s proportions,” she said. 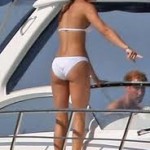