Addressing the growing population and consumption must be part of protecting environment, according to Royal Society.

Sir John Sulston, who led the team behind People and the Planet, said the growing population in the developing world must be addressed as a key part of tackling rising carbon emissions and extinction of species.

He said voluntary family planning should be available to all. The Least Developed Countries could be provided with free contraception for just US$ 10.5 billion (£7 billion) a year and developing countries could improve services with help from the rich world.

Sulston also said consumption needs to be addressed in the developed world by encouraging people to use less fossil fuels. This could be done through switching to low carbon energy, improving technology and change in behavior.

Developing countries will be building the equivalent of a city of a million people from now until 2050, but this can be part of the solution by making sure these cities are sustainable by providing public transport and efficient buildings.

Despite fertility declining, the population is still growing at about 80 million annually.
The world’s poorest people should have free access to contraception, according to a new report from the Royal Society.

“There are at least 200 million women in the world who have an unmet need for contraception,” according to Sulston . “That is to say if someone was offering them the means, they would want it. It does not mean they don’t want children, they want the opportunity to space their children out.

“It is extremely good value for aid because it has such a good knock-on effect for women and children.”

Sulston has suggested, that Gross Domestic Product (GDP) should be replaced by a new measurement that takes into account natural capital in order to encourage Governments to protect the environment.

He said addressing the growing population, rising consumption and developing a new international measurement to encourage green growth must be priorities for the Rio+20 Earth Summit in June.

“The world now has a very clear choice. We can choose to address the twin issues of population and consumption.” 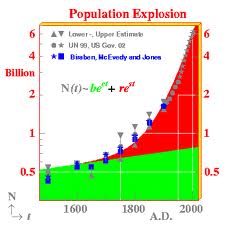