The discovery of Eris and the presumption that it was bigger than Pluto, pushed the Astronomical Union to come up with a new definition of ‘planet’ that has excluded Pluto.

Pluto and Eris were downsized to ‘dwarf planets’, roundish objects that do not gravitationally dominate their orbits.

A couple of years ago, Michael E. Brown, a professor of planetary astronomy at the California Institute of Technology, spotted an object in the night sky that was so bright and so far away that he was sure it was bigger than Pluto.

That object, the dwarf planet Eris passed in front of a distant star. Astronomers led by Bruno Sicardy of the Paris Observatory measured how long the star disappeared behind Eris and from that, calculated the width of Eris.

If astronomers had believed Pluto to be larger than Eris, they might have kept the solar system at nine planets.

For decades, Pluto was the magically shrinking planet. It was first thought to be about as large as the Earth, nearly 12,900 kilometers wide, but subsequent measurements had it smaller and smaller.

In 1980, Alexander J. Dessler, now at Texas A&M University, and Christopher T. Russel of the University of California, Los Angeles, published a graph of estimates through the years and joked that Pluto would disappear entirely in 1984.

Between 1985 and 1990, the orbit of Pluto’s moon, Charon was edge-on as seen from Earth, and eclipses let astronomers measure the diameters of Pluto and Charon more directly.

But that was not still the end of the story. The surface of Pluto can reach a relatively balmy minus 182 degrees Celsius, warm enough for some methane and nitrogen ices to evaporate and create an atmosphere, and the atmosphere bends light. Thus the true diameter of Pluto remains uncertain.

However, a precise measurement of Pluto shall be known by 2015 when NASA’s New Horizons spacecraft fly past to it. 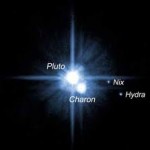 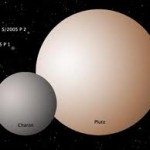 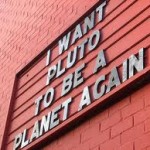