In San Gabriel, California, signs of a makeshift maternity house were evident everywhere.

In one kitchen, stacks of pictures showing a mother holding her days old baby sat next to several cans of formula. In another, boxes of prenatal vitamins were tucked into rice cookers.

Several bedroom doors had numbers on them. Some rooms were rather luxurious with a large walk in closet, a whirlpool and a small refrigerator.

For months, officials say, the house was home to ‘maternity tourists.’ In this case, pregnant Chinese women who had paid tens of thousands of dollars to deliver their babies in the United States, making the infants automatic American citizens.

Officials shut down the home, sending the ten mothers who had been living there with their babies to nearby motels.

San Gabriel, about 30 kilometers east of Los Angeles, has grown rapidly in recent years and is now a hub of businesses catering to Asian immigrants, tea shops fill the strip malls and for sale signs in Chinese and Vietnamese are planted in front of several homes.

City officials ask basic questions to the women they found in the maternity house: how they get here and who paid for them to come? The answers: on a tourist visa and our family paid. The house’s owner, Dwight Chang, was fined US$ 800 dollars for code violations.

The building inspectors and police officers walked into the small row of connected town houses here knowing something was amiss.

Neighbors had complained about noise and a lot of pregnant women coming and going. And when they went into a kitchen they saw a row of bassinets holding several infants, with a woman acting as a nurse hovering over them.

Immigration experts say they can only guess why well to do Chinese women are so eager to get United States passports for their babies, but they suspect it is largely as a kind of insurance policy should they need to move.

The children once they turn 21, would also be able to petition the United States government to grant their parents permanent residence status.

The Center for Health Care Statistics estimates that there were 7,462 births to foreign residents in the United States in 2008, the most recent year for which statistics are available. That is a small fraction of the roughly 4.3 million total births that year.

Yolanda Alvarez, who walks her dog past the tow houses twice each day, said neighbors had complained among themselves for nearly a year, noticing “many many young women going in and out of the house.” 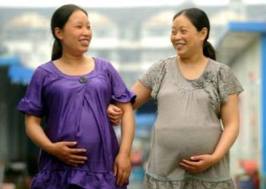