Britain’s Prince William and wife Kate Middleton are due in California next month. The cash-strapped US state hopes that the royal couple’s visit will boost tourism in the area.

The couple have already narrowed down the options, saying last week they plan to visit “Los Angeles and surrounding areas” on the trip.

While travel managers hope to showcase the Golden State’s attractions for visitors, speculation is rife where exactly the newlyweds will go and who they will see during the July 8-10 tour.

But it still leaves open a lot of possibilities centered on LA, home to an enormous British community as well as the center of the US movie industry.

A meeting with David and Victoria Beckham, guests at the wedding who live with their children in a Beverly Hills mansion, is seen as among the most likely stops.

Elton John, a close friend of William’s mother Princess Diana, also has a place here.
The royal couple might prefer to hang out in Santa Monica, home to a huge British population in the area.

It will not be the first British royal trip to California: William’s grandmother Queen Elizabeth II visited in 1983, stopping in LA, San Diego, Palm Springs and San Francisco.

Princess Diana was a hit when she came in the 1980s, while father Prince Charles and his second wife Camilla visited the San Francisco Bay area in 2005.

,The trip comes as California, the most populous US state whose economy would make it the eighth largest economy in the world if it were a country, struggles to recover from the global recession. 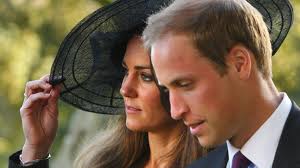