World no. 2 Rafael Nadal made an impressive win 6-4, 6-3, 6-4 over German Tommy Haas and advanced to the third round with rival Roger Federer.

Afterwards, Nadal was quick to pay tribute to his opponent, saying: ‘He’s a fantastic player. He’s had a lot of injuries the last couple of years but it’s always great to play Tommy.

Haas, 33 and twice a semi-finalist in Melbourne, has seen his career derailed by injury in recent years, but showed flashes of the play which saw him rise to number two in the rankings 10 years ago.

The German had no answers to match an impressive Nadal. Two early breaks saw seeded no. 2 Nadal surge ahead and although Haas clawed one back, the Spaniard overcame some nervy moments to take the opening set in 54 minutes.

The second set was straightforward with breaks at the start and the end, but Haas put up stronger resistance in the third by claiming a 3-1 lead.

Nadal hit back to level at 3-3 and then claimed the match when Haas missed a forehand at break point in the 10th game.

The Spaniard is congratulated by Haas as the Nadal looks forward to the third round in Melbourne. 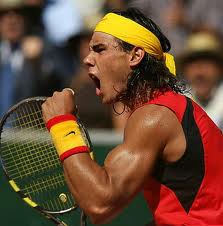